In talking and sharing about the North American Thebaid Project, I feel compelled to try to describe both what it is, and what it is not.

Much of this description revolves around the type of photography I seek to apply to the project.

Often I find it much easier to say “what it is not.”

My “apophatic” description of the North American Thebaid Project leads me to ask if you are familiar with the recent book by Alexei Krindatch, Atlas of American Orthodox Christian Monasteries.

His is a fine guide and a delightful, even inspiring, reference book, with many wonderful photos of monasteries and monastic life; it is at the same time not at all the type of photography or the sort of book I have set out to produce.

My background is more in fine art photography than documentary or even journalistic photography (categories which might best describe Alexei’s work).

Working primarily in black & white — which by its very nature abstracts the subject, shifting it beyond place and time — I’ve seen my gelatin silver prints selected for juried exhibits (and even win some awards) since 1983. For almost twenty years I worked in a range of film formats: 35mm, 120 (medium format), and 4×5 (large format). Then, at the turn of the century/millennium, I began making my first photographs using the digital medium, and had my first museum-grade, fine-art inkjet prints selected for the Water Tower Annual, in Louisville KY. 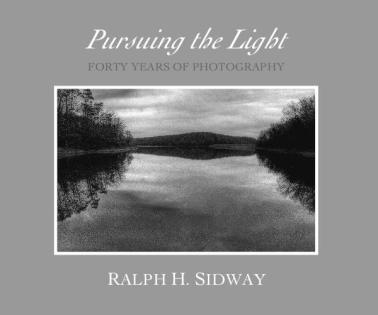 After a major digital camera upgrade in 2008, I returned to fine art landscape photography with renewed vigor and vision, and in 2014 published a coffee table book titled Pursuing the Light, a forty-year retrospective of my landscape photographs. The process of preparing that book led me to reflect on just what photography is, from an Orthodox Christian theological and aesthetical viewpoint. I have adapted some of my insights from the Preface to my book, and wish to share them with you.

When it comes to landscape photography, there is perhaps no one better known to the general public than Ansel Adams, and I gladly list him as a primary inspiration of mine. But in addition to Adams, I would like to mention two other photographers who have greatly impacted my work and approach to the craft: John Sexton, and Minor White.  In presenting my inner approach to photography, a brief discussion of these three figures has direct bearing on the merits of The North American Thebaid Photographic Pilgrimage Project.

Ansel Adams was a towering figure in photography, a technical master of exposure, developing and printing, with a highly refined sense of composition and light. However, Minor White, while less well known to the general population, had (I believe) a deeper, more philosophical and even spiritual approach to photography than Adams, as this quote of his reveals:

While we cannot describe its appearance (the equivalent), we can define its function. When a photograph functions as an Equivalent we can say that at that moment, and for that person the photograph acts as a symbol or plays the role of a metaphor for something that is beyond the subject photographed…

One does not photograph something simply for “what it is”, but “for what else it is”. (Minor White, Source, emphasis in original.)

One biographer of White notes that “White was a deeply religious man whose whole life was a spiritual journey. His photography arose out of this and was an inherent part of this pilgrimage. It isn’t an approach that has been fashionable in academic circles in recent years.” (Emphasis added.)

White worked with Ansel Adams for a number of years, as did John Sexton, who was one of Adams’ last assistants, and who has gone on to create a unique and evocative body of work, establishing himself as one of the great contemporary photographers.

In the preface to his most recent book, Recollections (2006), Sexton writes,

I feel privileged to communicate through the medium of photography, to pursue the magic of light as it transforms the silver emulsions of my film and paper, as well as the emulsion of my heart, mind, and soul… I hope that you will sense a glimmer of the magic and the excitement I felt while making these images.

With such a warm, heartfelt ethos, and building on Ansel Adams’ technical foundation, John Sexton has charted his own luminous course, and in a manner reminiscent of Minor White, has articulated a deeply sensitive photographic aesthetic, conveyed in his memorable and award-winning books, Quiet Light, Listen To The Trees, Places of Power, and Recollections.

In my own work, I too have been inspired by Ansel Adams, but feel I have followed more in the philosophical-spiritual footsteps of Minor White and John Sexton in forming my own Orthodox Christian photographic aesthetic. In the Preface to my book, ‘Pursuing the Light’, I present my “theology of photography” as follows:

I have come to believe that to “draw with light” [the literal meaning of the word, “photography”] is to take part in the mystery of the cosmos itself. After all, light was created on the first day (Genesis 1:3).

Thus the artist who interprets and shares the beauty of creation, who uses light to share Light, is in some humble way partnering with the Master Artist. He is co-working with the Word of God through Whom light and all things came to be. In sharing his images with the viewer—the Other—the photographer quietly, gently, contributes to an essential aspect of human life, that of relationship, community, or more theologically, communion.

So the creation and sharing of beautiful images speaks to the soul of the viewer, hopefully instilling and nurturing beauty, peace, harmony, balance. And in doing so, the photographer/artist is glorifying God.

Is this not what the Psalmist ecstatically cries out when considering the starry sky?

“The heavens are telling the glory of God; and the firmament proclaims his handiwork. Day to day pours forth speech, and night to night declares knowledge. There is no speech, nor are there words; their voice is not heard; yet their voice goes out through all the earth, and their words to the end of the world.”  — Psalm 19:1-4

Somehow, in stillness, through silence, photography can speak words of beauty, light, truth and love. And yet, in considering this mystery of light and beauty, and why fine images stir our souls with longing, we may suggest another possibility:

Perhaps it is not not merely we who pursue light.

Perhaps it is the Light which pursues us.

Since writing that, I have come to further appreciate how Orthodoxy’s love for apophatic wisdom, and its embrace of paradox in presenting the mysteries of God, Man, Life, Salvation, Worship, have specific relevance when we consider the place of photography within the Orthodox tradition.

Photography, especially photography which tries to convey something as other-worldly and intense as the Monastic Way, is perhaps the ultimate apophatic paradox. As I wrote recently concerning the North American Thebaid Project:

My goal is “to convey through visual means the unseen spiritual life of monks and nuns of North America.”

And, as I state in the introductory video, the Thebaid Project “is not really so much about what is seen, but what is unseen.”

It is that profound apophatic paradox which spurs me on, which calls me, which challenges me to pursue this unique path, and I invite you to join me on the journey.

I hope these considerations inspire you to support The North American Thebaid Photographic Pilgrimage Project, with your blessings, prayers, and if at all possible, with some tangible means to enable this good work to proceed.

4 thoughts on “‘Pursuing the Light’ – A Theology of Photography”