“Orphaned at an early age,” this great saint “was raised by a certain good and pious nun.” He “imitated his adoptive mother in the habits of monastic life, in fasting and in prayer,” and grew to be a shepherd of souls, founding a monastery which thrives to this day, over a millennium later.

From this we see how proximity to monasteries through regular pilgrimages can help children and young people — all of us, really — grow in the Life in Christ by cultivating the good habits of the monks and nuns. And who knows, some of us may eventually become monastics ourselves!

Venerable Athanasius the Founder of the Great Lavra and Coenobitic Monasticism on Mt. Athos 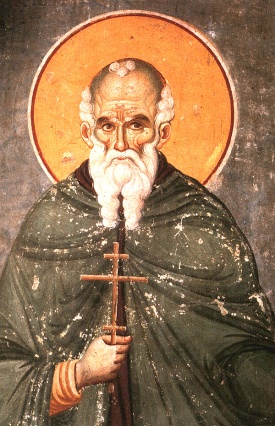 Saint Athanasius of Athos, in holy Baptism named Abraham, was born in the city of Trebezond. He was orphaned at an early age, and being raised by a certain good and pious nun, he imitated his adoptive mother in the habits of monastic life, in fasting and in prayer. Doing his lessons came easily and he soon outpaced his peers in study.

After the death of his adoptive mother, Abraham was taken to Constantinople, to the court of the Byzantine emperor Romanus the Elder, and was enrolled as a student under the renowned rhetorician Athanasius. In a short while the student attained the mastery of skill of his teacher and he himself became an instructor of youths. Reckoning as the true life that of fasting and vigilance, Abraham led a strict and abstinent life, he slept little and then only sitting upon a stool, and barley bread and water were his nourishment. When his teacher Athanasius through human weakness became jealous of his student, blessed Abraham gave up his teaching position and went away.

During these days there had arrived at Constantinople Saint Michael Maleinos (July 12), igumen of the Kyminas monastery. Abraham told the igumen about his life, and revealed to him his secret desire to become a monk. The holy Elder, discerning in Abraham a chosen vessel of the Holy Spirit, became fond of him and taught him much in questions of salvation. One time during their spiritual talks Saint Michael was visited by his nephew, Nicephorus Phocas, a military officer and future emperor. Abraham’s lofty spirit and profound mind impressed Nicephorus, and all his life he regarded the saint with reverent respect and with love. Abraham was consumed by his zeal for the monastic life. Having forsaken everything, he went to the Kyminas monastery and, falling down at the feet of the holy igumen, he begged to be received into the monastic life. The igumen fulfilled his request with joy and tonsured him with the name Athanasius.

With long fasts, vigils, bending of the knees, with works night and day Athanasius soon attained such perfection, that the holy igumen blessed him for the exploit of silence in a solitary place not far from the monastery. Later on, having left Kyminas, he made the rounds of many desolate and solitary places, and guided by God, he came to a place called Melanos, at the very extremity of Athos, settling far off from the other monastic dwellings. Here the monk made himself a cell and began to live an ascetical life in works and in prayer, proceeding from exploit to exploit towards higher monastic attainment.

The enemy of mankind tried to arouse in Saint Athanasius hatred for the place chosen by him, and assaulted him with constant suggestions in thought. The ascetic decided to suffer it out for a year, and then wherever the Lord should direct him, he would go. On the last day of this year’s length of time, when Saint Athanasius set about to prayer, a heavenly light suddenly shone upon him, filling him with an indescribable joy, all the thoughts dissipated, and from his eyes welled up graced tears. From that moment Saint Athanasius received the gift of tenderness , and he became as strongly fond of the place of his solitude as he had formerly loathed it.

During this time Nicephorus Phocas, having had enough of military exploits, remembered his vow to become a monk and from his means he besought Saint Athanasius to build a monastery, i.e., to build cells for him and the brethren, and a church where the brethren could commune of the Divine Mysteries of Christ on Sundays.

Tending to shun cares and worries, Saint Athanasius at first would not agree to accept the hateful gold, but seeing the fervent desire and good intent of Nicephorus, and discerning in this the will of God, he set about the building of the monastery. He built a large church in honor of the holy Prophet and Forerunner of Christ, John the Baptist, and another church at the foot of a hill, in the name of the Most Holy Theotokos. Around the church were the cells, and a wondrous monastery arose on the Holy Mountain. In it were a trapeza (dining area), a hospice for the sick and for taking in wanderers, and other necessary structures.

Brethren flocked to the monastery from everywhere, not only from Greece, but also from other lands, simple people and illustrious dignitaries, desert-dwellers having labored in asceticism for long years in the wilderness, igumens from many monasteries and hierarchs wanting to become simple monks in the Athos Lavra of Saint Athanasius.

The saint established at the monastery a cenobitic monastic Rule on the model of the old Palestinian monasteries. Divine services were served with all strictness, and no one was so bold as to talk during the services, nor to come late or leave the church without necessity.

The Heavenly Patroness of Athos, the All-Pure Mother of God Herself, was graciously disposed towards the saint. Many times he was privileged to see Her with his own eyes. By God’s dispensation, there once occurred such a hunger, that the monks one after the other quit the Lavra. The saint remained all alone and, in a moment of weakness, he also considered leaving. Suddenly he beheld a Woman beneath an ethereal veil, coming to meet him. “Who are you and where are you going?” She asked quietly. Saint Athanasius from an innate deference halted. “I am a monk from here,” Saint Athanasius replied, and spoke about himself and his worries.

“Would you forsake the monastery which was intended for glory from generation unto generation, just for a morsel of dry bread? Where is your faith? Turn around, and I shall help you.” “Who are you?” asked Athanasius. “I am the Mother of the Lord,” She answered, and bid Athanasius to strike his staff upon a stone. From the fissure there gushed forth a spring of water, which exists even now, in remembrance of this miraculous visitation.

The brethren grew in number, and the construction work at the Lavra continued. Saint Athanasius, foreseeing the time of his departure to the Lord, prophesied about his impending end and besought the brethren not to be troubled over what he foresaw. “For Wisdom disposes otherwise than as people judge.” The brethren were perplexed and pondered the words of the saint. After giving the brethren his final guidance and comforting all, Saint Athanasius entered his cell, put on his mantiya and holy kukolion (head covering), which he wore only on great feasts, and emerged after prolonged prayer. Alert and joyful, the holy igumen went up with six of the brethren to the top of the church to inspect the construction. Suddenly, through the imperceptible will of God, the top of the church collapsed. Five of the brethren immediately gave up their souls to God. Saint Athanasius and the architect Daniel, thrown upon the stones, remained alive. All heard the saint call out to the Lord, “Glory to Thee, O God! Lord, Jesus Christ, help me!” The brethren with great weeping began to dig out their father from the rubble, but they found him already dead.